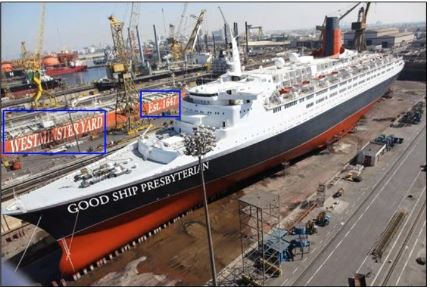 Today’s show is based on Gary DeMar’s article of Sep. 26, 2019 on the American Vision website. We will look at how some churches and denominations fight (or don’t fight) the cultural war.  https://americanvision.org/

The Baptist ship is largest in the harbor, with the longest cruises. They have a strange strategy of winning the battle. They make friends with the enemy, and try to convert them afterwards.

The Presbyterians have a manual. They have a long history from the Westminster Confession. The manual is studied and memorized. Everyone is dressed well, and is very nice-looking. The captains of the ships teach the Westminster Confession from birth to death. They use their ship as a passenger ship instead of a warship. They repaint the ship every year; whether it needs it or not.
The captains avoid discussing the fact that the ship has never left the harbor in 150 years. They are happy staying in dry dock, discussing their theology.

Charismatic and Baptists are out of the harbor fighting. They keep asking when the Presbyterians are going to join in the fight during this culture war. Presbyterians sit in dry dock under permanent maintenance.